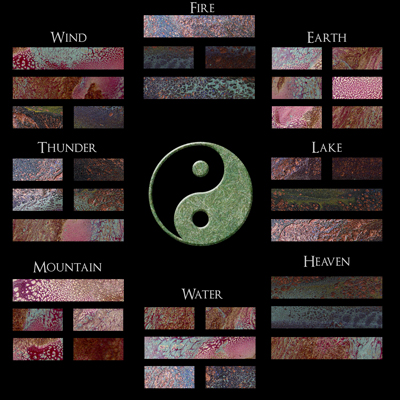 The eight trigrams are the building blocks of the 64 hexagrams of The I Ching. In this piece, which is a pretty straight forward design piece, I used yin and yang lines that I made from the large wet on wet spray paint art pieces I’ve been creating as of late. The yin lines are the shorter, or broken lines. These represent the receptive, or feminine energy. The larger yang, or unbroken lines represents the creative, or male energy. The varying combinations of yin and yang lines, when grouped in threes, create the eight trigrams of the I Ching.

For this piece I wanted to show the eight trigrams which are associated with eight natural states or eight features of the physical world, in what is known as the “Later Heaven” arrangement developed by King Wen. There is also an “Early Heaven” arrangement of the trigrams developed by Fu Hsi. Same trigrams, but in a different order. Later Heaven represents the flow and energy of life once it is created. It represents created energies in a human being. I’ve put a link to a very detailed and informative description of the trigrams by Dan Miller from the Qi Journal website at the bottom of this post.

In short, Later Heaven begins at the 9 o’clock position, which is East (yes, east, as the Chinese symbols are reversed from our western patterns) and represents the trigram for Thunder. Thunder is recognized as being the arousing. It’s the spark, the initial energy that gets life or events flowing. Moving clockwise Thunder gives way to Wind which nurtures the spark and moves it along. Next is the trigram for Fire. The spark, the consciousness first seen in Thunder and then nurtured and carried by Wind now finds realization and maturation in Fire. The Fire trigram is representative of the South and thus the attainment of adulthood, or a full realization and maturity. Here there is the exploration of the spark or idea. As the idea or thought is further formed it is moved to the trigram for Earth. This trigram is made entirely of yin, or receptive lines and is the place where the idea grows and is internalized. The explorations and play conducted under the heat and flame of Fire is now brought inward to the receptive.

From the receptive, the thoughts and knowledge move to the contemplative nature of the trigram for Lake. In many ways this transformation is one from the physical to the spiritual. The Lake trigram is also representative of the West and the time of harvest, the autumn. One could look at it as an internal harvest of the knowledge which was originally sparked in Thunder.

Here’s the image, “The Eight Trigrams of the I Ching: Later Heaven”. Original size is 18″x18″

Now, I confess that the above explanation is probably lacking. I’m not a writer by trade, lol, although I often am mistaken for one. Here’s a link to the Qi-Journal article by Dan Brown I mentioned earlier. It’s in-depth and informative and covers a lot of ground concerning the eight trigrams and their development.

The Eight Trigrams by Dan Brown

As always, comments and thoughts are welcome as is outright outrage, lol…

yours in possibility,
Cosmo

P.S. My thanks and love, as always to my treasured and cherished Zen Girl for all she does and all that she inspires.